There are some signs of the start of a Google search ranking algorithm update that kicked off on September 1, 2021. The truth is, it seemed like an update touched down for a short period of time and then slowed down. There are not a huge number of complaints, but the tools are picking up on the fluctuations in the Google search results.

Like I said, the chatter in the SEO community is not at super high levels. It was however high enough for me to spot check other tools I use, such as the tracking tools, to see if there was an update. And it seems like we did have some sort of update yesterday, on September 1st.

It is not clear, like most updates these days, what this update targeted. Google did not confirm the update either.

Here is the chatter from the two WebmasterWorld threads and also the Black Hat World forums.

On my side, since yesterday everything has been going very badly. Drop followed by drops…

Yes, the traffic has been very unstable and poor quality. Huge drop in my home page and some landing pages since the weekend, USA traffic down 30% today at 11:30am. It usually ticks up by end of day somewhat, with an odd burst at 10pm and later…all insane manipulated traffic patterns. Meanwhile, plenty of traffic from countries I don’t serve. I had an inquiry for shipping to Kenya this morning but almost nothing from the USA for weeks.

Indexing slower than usual for anyone else?

Hope that September will be as successful as the last days of August were – a lot of my site traffic and Google positions are back.

I think we are at the beginning of a big update.

I had also a drop in traffic but it is very small.

It was not a super wide spread update from what I can tell from the chatter, but maybe SEOs are a bit slower to notice today?

Here are screenshots from the popular tracking tools that track fluctuations within the main Google search results. Many of them are showing changes on September 1st. 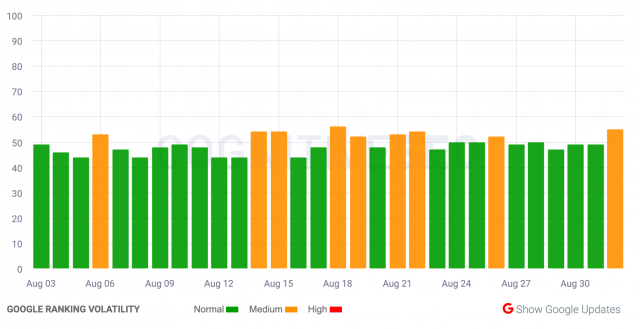 So did any of you notice big ranking changes in Google yesterday?