Dancehall songstress Ishawna has fired back at T.I. for his comment about women who rock long eyelashes and short hair.

T.I. raised some eyebrows on Instagram on Friday when he decided to get something off his chest regarding short hair women. Perhaps his intent was to anger a large group of women including his wife, Tiny Harris and Ishawna, and he did managed to do that with that post.

“Ladies I’m going, to be honest, Some of ya’ll eyelashes longer than y’all real hair and it bothers me,” T.I. said. In the caption, he admitted, “There I said it. Been holding that in for a while now.”

Well, as expected, a lot of women would have preferred if he had kept the comment to himself, while others found it funny. Tiny Harris, T.I.’s wife and a former member of the multi-platinum R&B group Xscape, took to the comment section to tackle the rapper. “I don’t know who the hell u speaking of!!!” she wrote.

Tiny’s comment did not stop Ishawna from dragging her in a fiery clap back. The “Equal Rights” singer took to her own Instagram story to repost Tips statement with her own added caption. 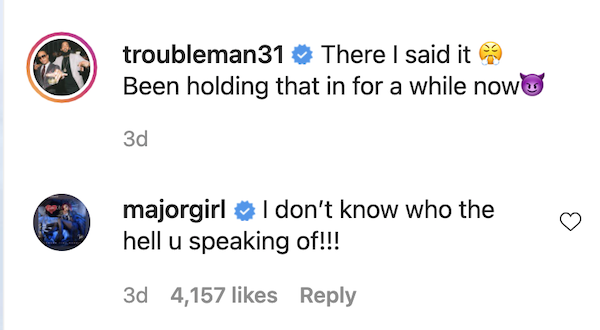 The cheeky Dancehall artiste has always been one to call out and lash men, including her ex-boyfriend Foota Hype. Many fans are now used to her feisty persona and found her response very funny.

LuvChyld on YouTube laughed, “Crushed linen, I wasn’t ready,” while others expressed their laughter with emojis. Meanwhile, some social media users expressed that Ishy was matching T.I.’s energy and keeping it real. 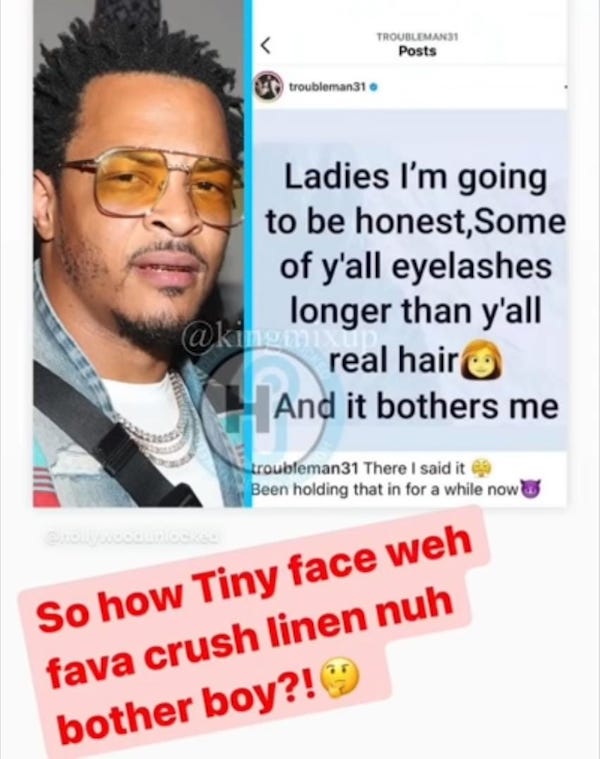 One person said, “Ishawna keeping it real. T.I. coming for females who love their eyelashes extensions but not what’s going on in his household double standards.”

Despite that, others felt that Ishawna’s attack should have been directed at T.I. and not his wife.

Ishawna has never been one to miss out on the opportunity to tackle pretty much anyone, no matter who gets caught in the crossfire. She is known for singing songs that subjugates men, such as “Restraining Order,” “Answer Me,” and “Equal Rights.”