Jada Kingdom is not fond of memes linking her “heavy” body to the devastating earthquake that left Haiti in shambles this morning.

The 7.2 magnitude earthquake, which was felt in Jamaica without creating any real damage, left up to 227 people dead and hundreds missing or injured in Haiti. The island has since been placed under a month-long state of emergency, and the Government has issued a call for help as families continue to search for their loved ones.

Yesterday, Jada Kingdom, along with other celebrities, expressed sadness at the situation. The “Heavy” singer appeared to be in shock after hearing the news this afternoon and took to Instagram to write, “No no no no no!!! #PRAYFORHAITI [sad face emojis][heartbreak emojis].”

Hours later, Jada Kingdom took to social media to announce that she will be performing in Hartford, Connecticut, today (August 15). However, the situation in Haiti is still an open wound for her, and she does not wish to joke about it.

In announcing her show, “Mi Affi Win,” on Instagram, Jada posted clips from a previous performance. In the first clip of just 3 seconds, the 22-year-old is seen twerking while fans reach out to touch her buttocks.

Jada Kingdom is famous for her callipygous shape and thick thighs. The singer further promoted her image when she released songs that accentuated her large rump like “Heavy,” “Budum,” and “It A Shake,” with Skillibeng.

One fan took to the comment section of her post to joke about her “heaviness,” causing the earth to “shake,” in reference to her size, shape, and song, like many others had been doing since the tremor.

“A that cause the earthquake eno Jada!!! I love it,” the fan wrote.

“done with the earthquake jokes….plenty people lost their lives….[broken heart emoji],” she expressed. 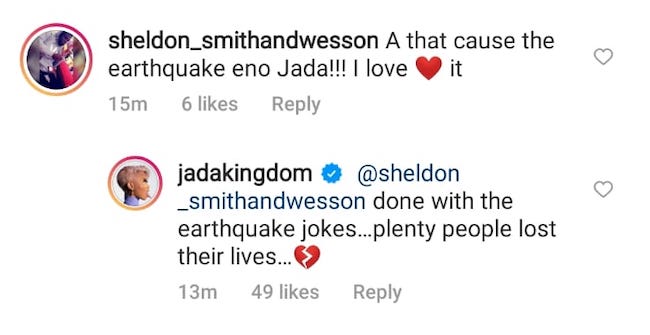 While the fan meant no harm in her comment, it is commendable that Jada is not fond of her song and body being used for memes relating to the situation, despite the publicity that comes with the circulation of such memes.

Along with Jada Kingdom, other artistes such as Spice, Shaggy, Taurus Riley Cardi B, T.I, and Rich The Kid had shared some encouraging words and prayers for the recovery of the disaster-prone French-speaking Caribbean island.