Starting Thursday, September 9, 2021 and going on through even today, September 13th, there has been a lot of chatter and volatility in and around the Google search results. It has not really cooled or calmed down, not yet, at least. This Google search ranking update seems unusual from others, not that it is unconfirmed, but because it is taking place over such a long period of time, with such intensity.

This unconfirmed update seems to be happening over a long period of time with a lot of intensity. It is big but not massive, and what I mean by that, it doesn’t seem to be as big as a core update.

The chatter within the SEO community started on Thursday, September 9th, from what I can see. We have the chatter in many places but here is what I found on WebmasterWorld and Black Hat World:

Seeing a drop this morning after some fairly steady incremental growth over the past few weeks.

SEMrush high for the 2nd day in the UK. Yesterday was better than average for us on a Thurs, feels like something’s going on.

UK looking messy in our vertical. Lots of irrelevant pages being ranked over relevant ones.

Huge drop this past week or so – hope I’ve found the bottom!

For me yesterday’s numbers ended-up at about 70%, weekend levels, across ALL sites including UK-focussed ones.

Today is trending very similar across all sites.

I need to check my SERPs to ascertain what they have done now!

Yes, a major update is being rolled out (no idea what). Check your rankings. To me it looks like a mini core update.

Noticed sudden hike in one my site. no drop

So the SEO community is noticing a big and long update, as you can see from the chatter.

The tools are picking up on the same exact pattern. That is, a long and big Google update between the 9th and today. Here are screenshots from the various tools: 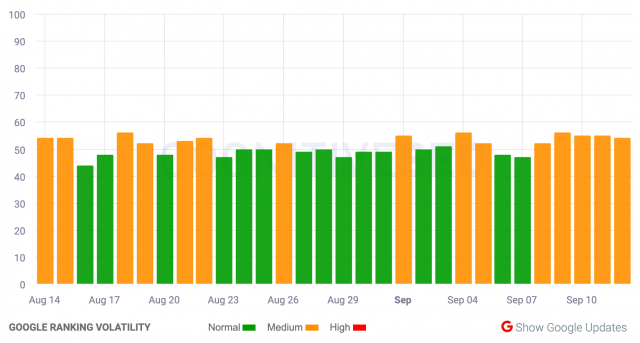 Have you all noticed major shifts in your site’s rankings and organic Google traffic? Let me know.

Why Is Good Medical Advice for Pregnant Women So Hard to Find?

Microsoft partners with Shopify to help retailers expand their reach