Over the past few days the Google search tracking tools, some of them, showed huge spikes in changes in the Google search results. Some did not, many did. The chatter didn’t really match the spikes. So many are asking me if there was a Google search update? I am note sure, I think the tools may have been triggered by some UI changes.

Maybe it was triggered by the new wide, button on top knowledge panel design that seemed to roll out this week. Maybe it has to do with the new continuous scrolling on mobile? Maybe it is that the indented results are now on 40% of the results? I don’t know for sure but the chatter is super limited in terms of SEOs complaining about ranking changes.

The WebmasterWorld has limited chatter starting around October 12th but that might be from reacting to the weekend update. So it is hard to say based on the chatter when the complaints were from…

Highly volatile and noticing my older articles drop off like flies. Feels like I’m on a treadmill at 50 mph.

Once again today, USA traffic drops like a stone at 9am sharp. Down 39% vs last four Tuesdays at 2pm. European traffic also gone again…France, Germany and almost all other Western Euro countries gone. It’s clear as a bell that this is the new ballgame with Google. Expect a lot less traffic during prime sales hours (8-6pm?). I don’t see this as a test, it’s already baked in.

Google is definitely rolling out these changes across a broader and broader range of searches in the USA. It has killed off all my most important searches like a cancer. This also explains why each of us is experiencing this at different times as it rolls out, not all at the same time.

Today I investigated why one group of terms that I ranked highly on for 15 years is brining in 30-40% less traffic in the last ten days or so. The page layout was a total mess! Google is opening the page with three ads, then a block of suggested famous people related to the search based on Wikipedia, then local results, then images, one organic result, youtube videos, then another block of four ads on page one! Four ads continued at the top of page two, so then you only got organic results after that. The whole thing was a jumbled confused mess and I can see how advertisers will get little to no real benefit with so many ads on the page either.

My USA traffic continues way down…starting at -66% today and my home page is -35% and main landing pages are down -35% to -60% today. This is just deadly for everyone…I don’t even see how large top ranking sites or advertisers with huge budgets would benefit.

Wow today is a spectacularly awful day. Declines week over week since the end of September. Very cool. Thanks Google!

Here are what the tools are showing, with RankRanger being calm, as are others, during the middle of the week, but some picking up this morning – maybe another weekend update is on the horizon? 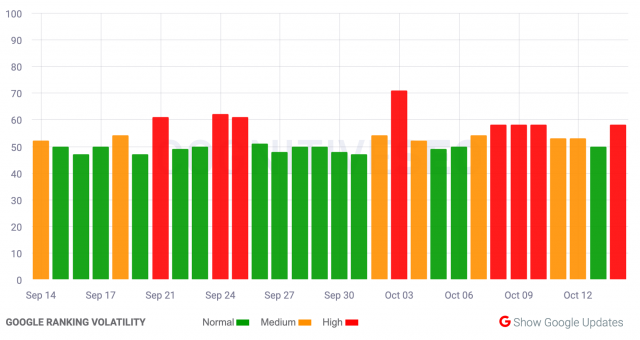 So again, it is not clear if there was a true Google search ranking algorithm update or if the user interface changes are tripping up some of the tracking tools?

What do you all think?